What a coincidence! A few days ago, I did put on Arctic05 website what I (parents & children as well) believed was a great marketing video from LEGO putting foward their toys collection around the Arctic… Greenpeace Belgium wrote me an email to attract my (our) attention on what I (we) did completly ignored about LEGO (see here below explanation)…I think it is essentiel to share here with you Greenpeace’ new international campaign that started on July 1st, 2014 against LEGO and SHELL in order to protect more the Arctic… In its new report, Greenpeace has accused LEGO of putting sales above its commitment to the environment and children’s futures.

On your side, you can with your familly, friends, colleagues participate to the protection of the Arctic by signing Greenpeace’ “Save the Arctic” petition (click here >>) or/& by joigning Arctic 4 Ever Facebook Fan Page >> 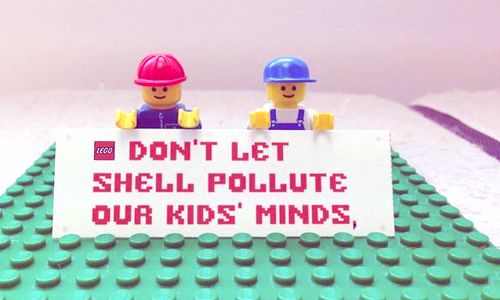 “… Imagine you’re eight years old and picture the Arctic. There are no oil rigs, no industrial shipping and no politicians fighting over it.

It’s just an endless sparkling expanse of sea and ice, populated by brave scientific explorers, magical animals and Indigenous Peoples who have called the far north home for millennia. An enchanted place to explore, create stories and let your imagination run free.

At least that’s what LEGO is telling kids. Its new Arctic play set has brought the magical polar north into kids’ bedrooms around the globe. And by doing that it’s helping to educate children and create a generation of Arctic supporters who will be inspired to protect it.

But sadly LEGO is only telling kids half the story. What it’s not telling them is how it’s also helping Shell to threaten this beautiful and fragile place.

It’s done a deal with Shell that’s helping the oil giant clean up its image as one of the world’s most dangerous Arctic drillers.

Shell wants to take advantage of the melting ice to drill for more of the fuels that caused the melting in the first place. But scientists say an oil spill there would be impossible to clean up, devastating the Arctic’s unique wildlife. It’s faced fierce criticism for its plans from environmental NGOs and regulators, and reputation-wrecking media coverage.

Shell knows it needs to fix its bad reputation to keep its Arctic scheme alive. And a deal with LEGO, the world’s favourite toy company, is a PR dream come true.

Already more than 16 million Shell-branded LEGO sets have been sold or given away at petrol stations in 26 countries. Shell is so delighted by the results that further promotions are already planned for this year.

But LEGO, the biggest toy company in the world, has built its brand on its continued promise of leaving a better world for children. And by teaming up with Shell it’s letting kids down.

Global warming is perhaps the biggest threat facing all children around the world, and protecting the Arctic is about protecting the climate. By letting Shell get its oily hands on kids’ toys, LEGO is allowing Shell to pretend it’s a caring, family-friendly company and helping it to get away with its Arctic aggression.

And children love the Arctic and its unique wildlife like polar bears, narwhals and walruses that are completely dependent on the Arctic sea ice. They wouldn’t want to see them threatened.

Their deal is also helping Shell to flog more of its dirty oil, build trust with its customers, and even exploit kids’ love of their toys to build life-long loyalty it just doesn’t deserve.

We can’t let this go on. Now Shell is threatening the Arctic, it’s time for LEGO to finally pull the plug on this deal.

That’s why today we’re launching a massive global campaign calling on LEGO to block Shell. In countries on six continents, our movement of more than 5 million Arctic defenders will mobilise to break this relationship. Together we’ll call on LEGO to stand up for Arctic protection, and for children, by ditching Shell for good.

We know this toy story can have a happy ending but LEGO will only listen if millions of people around the world, like you, ask Lego to stop cleaning up Shell’s image… further info >> “.