A 29-year-old Polar bear nicknamed “Arturo, the saddest Arctic bear in the world” seems to live in “deplorable” conditions at the Mendoza Zoo in Argentina. According to reports, this Polar bear lives alone in a concrete enclosure where temperatures are reaching +- 100F ( +- 38 Celsius).

A petition at www.change.org has received more than half million signatures to Save “Arturo” by calling on Argentina to relocate him to a more suitable natural habitat at Canadian Assiniboine Park Zoo in Winnipeg where a much better life is awaiting him… The petition, which has a goal of one million signatures, also says Arturo hasn’t been able to swim for 28 years and the pool in his habitat is filled with stagnant water (see below videos). 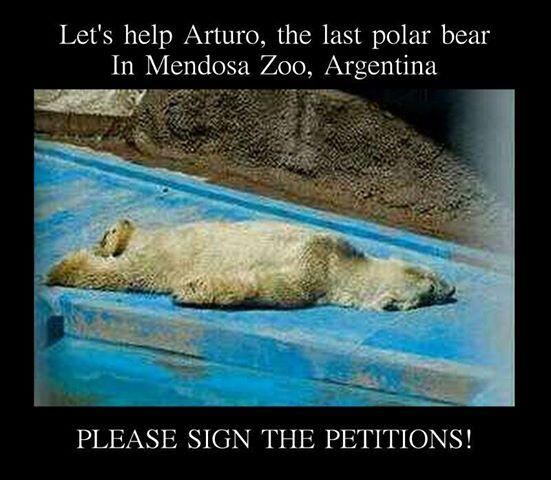 What do you think about this story ? What are your solutions ? How should the zoo authorities act towards animal respect & in particular “Arturo” ? Or, is this just led again by big money business…?

His enclosure partner “Pelusa” died in 2012 living in similar conditions. The petition at www.change.org indicates the living environment is in breach with the Association of  Zoos and Aquariums’ Polar Bear Care Manual, which calls for careful attention to water quality and air temperature: “… Techniques to raise or lower humidity within indoor and outdoor exhibits include …. pools in which the bears can swim.” As you can see, Arturo hasn’t been able to swim for 28 years… further info >>“.

The below video  appears to show “Arturo” in a shallow dark (so dirty? ) pool with stagnat water as he is wetted down with a hose…

Bill McDonald, CEO of the Winnipeg Humane Society, has commented that “Arturo” is “going insane” (see below video) and that Argentina’s hot weather is just not suitable for a Polar bear.

The Press is indicating that:  Assiniboine Park Zoo of Winnipeg in Canada with its International Polar Bear Conservation Centre has tried to contact the Mendoza Zoo, but was reportedly unsuccessful in trying to arrange a transfer earlier this year.

According to CBC News, the Mendoza Zoo had rejected the Canadian zoo’s initial offers, citing “Arturo’s” old age as the reason he would likely not survive the trip under anesthesia. Transferring “Arturo” would also mean compliance with the Canadian Food Inspection Agency’s strict regulations, which require specific records about him dating back at least three years that the Mendoza Zoo does not apparently have… further info >>