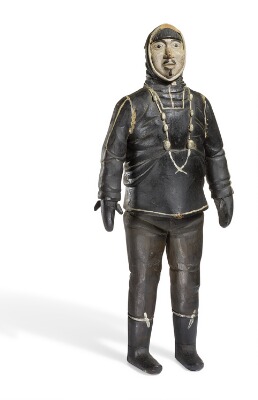 “… Johannes Kreutzmann was born in 1862 in the trading station Kangaamiut, located on a small island northwest of Maniitsoq/Sukkertoppen. He was the third child out of seven children. “Ujuaannaat”, as Johannes Kreutzmann was called, lived his entire life in Kangaamiut. His Danish grandfather, Ernst Kretzmer, born on Funen in 1784, moved there in 1823 and was the manager of the trading station to his death in 1853. Why Johannes came to be called Kreutzmann is not known, but in his daily life he was called “Karusse” by the Greenlanders…”.