Austrian skipper Norbert Sedlacek’s goal is to circumnavigate famous Arctic Northwest passage and Antarctica in just 7 months without assistance and stopping! This extreme sailing adventure with code name “ANT-ARCTIC-LAB 2018-19” will be accomplished on his 60ft. racing yacht Open60 (see below picture) through the most dangerous icy waters of our planet…

Over the next two-and-a-half years, 53-year-old sailor Norbert Sedlacek and his project team will prepare for this Arctic voyage. His world record attempt will start from Les Sables d’Olonne on the French Atlantic seaboard in the middle of July 2018 and cover a distance of about 34,000 nautical miles before ending back where he started in February 2019.

The sailing itinerary is the following:  starting from Les Sables d’Olonne (France) to the Arctic, through the Arctic Northwest Passage, down the Pacific Ocean and passing Cape Horn to circumnavigate the Antarctic continent. After rounding Cape Horn a second time, the journey will continue north through the Atlantic Ocean to the final destination of Les Sables d’Olonne.

During this record breaking voyage the yacht will draw media attention on the changing state of the oceans, the global warming, the environmental condition of the polar caps and the affect of rising CO2 emissions are having on the planet.

To succeed, the yacht will be built using 100% sustainable and/or recyclable materials and the project will also show how the yacht can be recycled and how using the yacht building materials has less damage to the environment than current methods of yacht building. 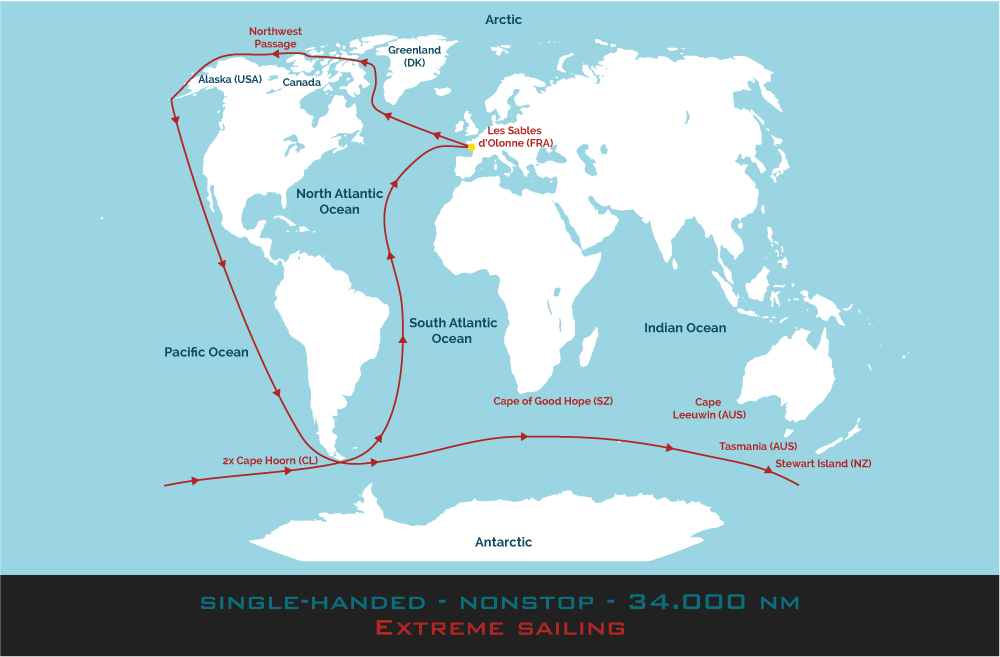 Sending the all team plenty of positive energy for their expedition preparation. I invite you to support them by sending them some motivation messages.