US President Barack Obama opened on the 31st of August 2015 the “GLACIER” conference in Anchorage, Alaska, by declaring in the two below videos: “We are not moving fast enough. None of the nations represented here are moving fast enough”.

He is challenging fellow world leaders to act boldly on climate change or “condemn our children to a world they will no longer have the capacity to repair”. 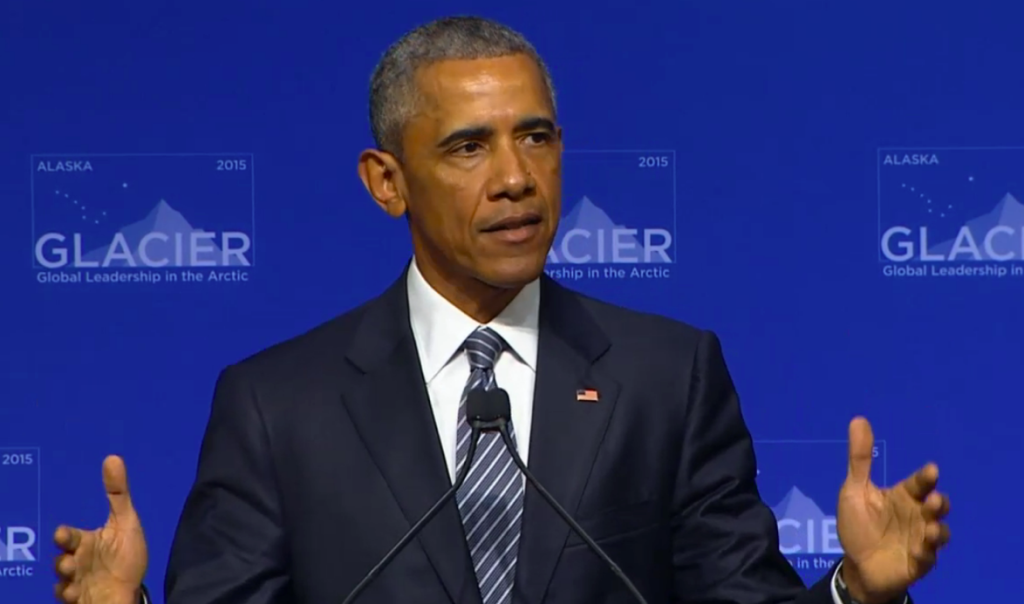 “If we were to abandon our course of action, if we stop trying to build a clean-energy economy and reduce carbon pollution, if we do nothing to keep the glaciers from melting faster, and oceans from rising faster, and forests from burning faster, and storms from growing stronger, we will condemn our children to a planet beyond their capacity to repair: Submerged countries. Abandoned cities. Fields no longer growing. Indigenous peoples who can’t carry out traditions that stretch back millennia. Entire industries of people who can’t practice their livelihoods. Desperate refugees seeking the sanctuary of nations not their own. Political disruptions that could trigger multiple conflicts around the globe”.

“Any leader willing to take a gamble on a future like that, any leader who refuses to take this issue seriously or treats it like a joke, is not fit to lead”.

“This year, in Paris, has to be the year that the world finally reaches an agreement to protect the one planet that we’ve got while we still can”.

“… GLACIER will focus the world’s attention on the most urgent issues facing the Arctic today and provide an unprecedented opportunity for foreign ministers and key stakeholders to define the region’s most crucial challenges; highlight innovative ways in which these challenges can be addressed at the local, national and international levels; and broaden global awareness of the impacts of Arctic climate change.

The State Department has invited foreign ministers and high-level leaders from the seven other Arctic nations as well as countries and intergovernmental bodies with strong interests in the Arctic, including Canada, China, Denmark, Finland, France, Germany, Iceland, India, Italy, Japan, the Republic of Korea, the Netherlands, Norway, Poland, Russia, Singapore, Spain, Sweden, the United Kingdom and the European Union. Cabinet-level U.S. Government officials will also be invited. Leading policy makers, indigenous leaders and influential public and private sector representatives from Alaska, the Arctic region and around the world are also expected to attend.

GLACIER is being organized and implemented by the U.S. Department of State with strong support and cooperation from across the U.S. Government. On July 17, 2015 the White House announced that President Obama will address the GLACIER conference…. further info under http://www.state.gov/e/oes/glacier/index.htm“.