The current population on earth is of +- 7,2 billions and astonishingly, we are merely only 6,2 millions “Arctic lovers” that have signed Greenpeace’ “Save the Arctic” petition to demand world leaders to declare the Arctic Ocean as a Protected Natural Sanctuary!

We should be at least 100.000 million willing to protect the Arctic environment! Come on,  please invite your friends, colleagues, family…to join in & protect this wonderful ocean…We can do much more, for sure! Goooooooo & sign Greenpeace’ “Save the Arctic” petition >> 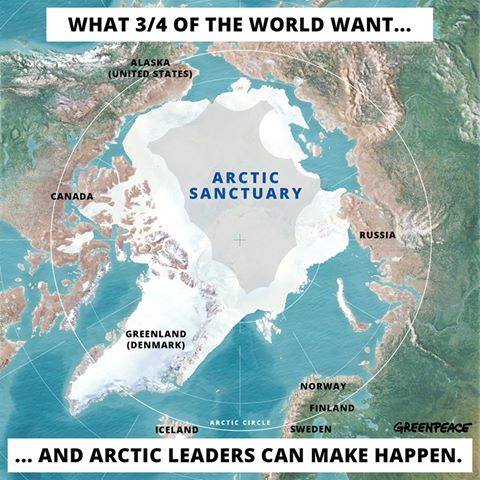 WHY the Arctic is so vital ? –  Please read carefully Greenpeace’ analysis:

“… In the last 30 years, we’ve lost as much as three-quarters of the floating sea ice cover at the top of the world. The volume of that sea ice measured by satellites in the summer, when it reaches its smallest, has shrunk so fast that scientists say it’s now in a ‘death spiral’.

For over 800,000 years, ice has been a permanent feature of the Arctic ocean. It’s melting because of our use of dirty fossil fuel energy, and in the near future it could be ice free for the first time since humans walked the Earth. This would be not only devastating for the people, polar bears, narwhals, walruses and other species that live there – but for the rest of us too.

The ice at the top of the world reflects much of the sun’s heat back into space and keeps our whole planet cool, stabilising the weather systems that we depend on to grow our food. Protecting the ice means protecting us all… more info under www.savethearctic.org“.