Arctic Frontiers 2014 will be held at the University of Tromso in  Norway from Sunday 19 to Friday 24 January 2014.  The theme of the conference is ‘Humans in the Arctic’. 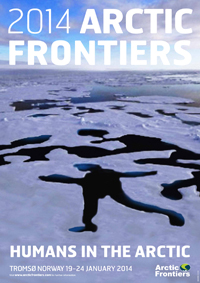 “… As with previous years the policy section will run for the first two days (Monday 20 and Tuesday 21 January 2014) followed by three days of science (Wednesday 22 January to Friday 24 January).  The science section will have four parts under 2 main headings: