« … A 4.500 miles sailing journey from Granville (France) to Uummannaq (Greenland – see below picture). To celebrate the friendship between two towns, two countries and two populations.

Northern France originated artist and sailor Pierre Auzias, currently living in Greenland, has twinned his adoptive town Uummannaq with his town of origin, Granville. An old marine friendship has been renewed. They set sail on board the 36 feets sailingboat « Avannaq » steering to Uummannaq. Estimated arrival: 21st of August 2011.

Beside the symbolic thread of this navigation which will integrate Irish, Islandic and Greenlandic old marine history vestiges, the journey will provide the public with a better understanding of the traditional Inuit culture and its fast mutation to our contemporary times.

Several Greenlandic personalities are invited on board « Avannaq » along the Greenland East and West coast. They will take us about the country’s new Home Rules, climatic consequences over fauna, fishing and hunting and other population migrations from deserted villages to the capital.

During this expedition, Pierre will faithfully paint his diary, regardless of the wheather conditions. Close to him, Pierre has selected as second Jacques Poumet, a long time skipper at the Glenans Center, and the video performer Bertrand Lozay well known in Greenland as TV correspondent for Uummannaq district… further info >>  » 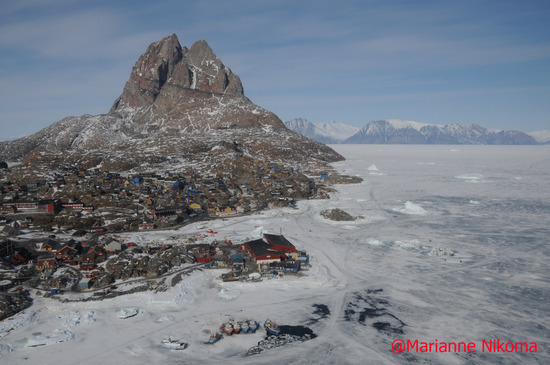