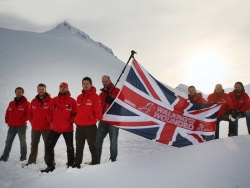 13 days later they succeeded their aim to reach the North Pole and proving to the world and firstly to themselves even war wounds could be cured and that the fact of having suffered physical injury in combat does not put an end to what could be called a certain part of life…Congratulations guys, super well done!