Born in Labrador, one of 19 children of a Scottish Hudson’s Bay Company cooper, Lyall grew up in a north dominated by white traders. After adventures that took him around the Arctic and down the Labrador coast, Ernie settled in Fort Ross in the Arctic Islands. He married an Inuit woman, Nipisha, and immediately became part of her extended family. Ernie writes warmly about his Inuit friends and family, and about daily life in the Arctic and the remarkable transformation of the north that has occured in the last 40 years.

An Arctic Man tells about life in the north as it is actually lived, by its native and non-native inhabitants alike; it offers a rare, privileged view of the peoples of the Canadian Arctic… » 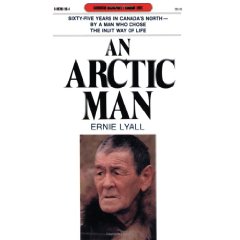