Your are passionate by cycling and by breathtaking northern landscapes, then you will love to watch the The Arctic Race of Norway 2015 taking place between August 13th and August 16th 2015.

After having wound through the Norwegian fjords around the idyllic islands of Lofoten and Vesterålen in 2013 and having led the pack to the North Cape in 2014, the Arctic Race of Norway continues its exploration beyond the Arctic Circle to discover the hidden treasures of the North… 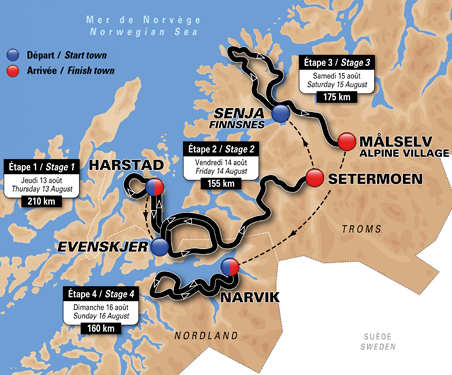 The riders on the Arctic Race of Norway 2015 will set off from the county of Troms on Thursday 13th August on a 210-km long stage around Harstad, the same place where Thor Hushovd won the stage and became the first rider to write his name on the event’s roll of honour, at the end of a tough sprint (the last 800 metres were at a gradient of 6 %), in front of more than 40,000 delighted spectators. The day after, the riders will head inland and will cross trough a military base 3 km from the finish in Setermoen, which could be won by talented sprinters such as Marcel Kittel or Alexander Kristoff, both present last year on the Arctic Race.

The 3rd stage will undoubtedly be the high point of the Arctic Race of Norway 2015. It will start with a 100-km loop on the island of Senja, a veritable gem of northern Norway, where the riders will be able to appreciate the beauty of a landscape that mixes mountains and oceans, long beaches of fine sand and fishing villages. However, they will not be there for a tourist excursion, since the finish of the stage is particularly demanding, with a summit finish at the mountain resort of Målselv (3.5 km at a gradient of 6 %).

A tense finish in Narvik!

The Arctic Race pack will return to the Nordland region on 16th August, with a last stage full of hazards around Narvik, a port made famous for being the theatre to a major Second World War battle in 1940. The wearer of the blue and orange leader’s jersey at the start of the stage will have his work cut out to contain the attacks of his rivals. Indeed, they could take advantage of a particularly lethal last 11 km (containing a 2.5-km slope at a gradient of 6% to be climbed four times) to pick up precious seconds and to hope to succeed Thor Hushovd (in 2013) and Steven Kruijswijk (in 2014). Beforehand, the young emerging men and women riders will have done battle in the Arctic Heroes of Tomorrow Race, with at the back of their minds the notion of imitating their elders in the years to come… further info under http://www.letour.com/arn …”.