Watch out folks for “Nordaustlandet 2015“!  This Arctic kayaking expedition will be without doubt spectacular, exceptional & worth following during this summer 2015!

5 Norwegians (maybe 6) are planning to circumnavigate by sea kayaks one of the most beautiful and remote icy island of Svalbard called Nordaustlandet (see second picture here below & map)!

The expedition team (Sigrid Henjum (31), Kjell Erik Reinhardtsen (34), Dag Marius Ammerud (43), Mads Riise Bjørnebye (25) and Simen Havig-Gjelseth (43)) will be confronted to dangerous drifting ice, icy winds, cold waters, the curiosity of walruses and for sure, the threat of polar bears which are in big numbers up there North. One of their challenges will be to avoid being confronted, as in 1999, to an hungry white bear ready to destroy their material, steal their food and provoke a helicopter rescue…

I interviewed well-known Norwegian sea kayaker Simen Havig-Gjelseth, one of the expedition members, for us to better understand all about this great Far North sea adventure: 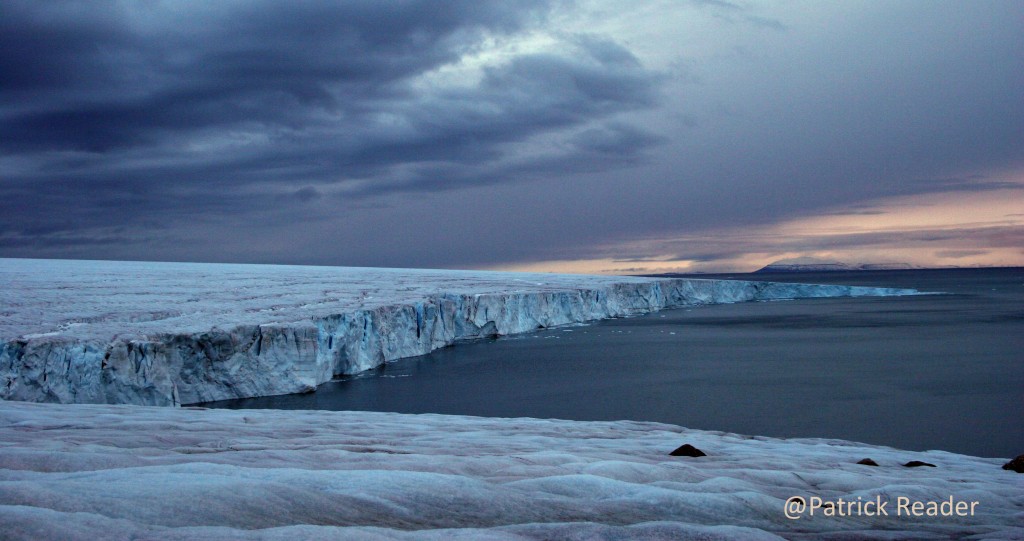 – You are planning to undertake this summer an exceptional kayaking expedition around Nordaustlandet (picture & map here above), one of the most beautiful & remote icy island of Svalbard: tell us more about the goals of your project?

We are planning to circumnavigate Nordaustlandet by sea kayaks. As far as we know it has never been done before, the reason being that usually there is too much ice on the north and east coast. Ice free conditions only happens occasionally.

Looking back we could have managed in 2012 and 2013 but last year it would have been impossible. Our goals are to see if it can be done and to explore this area by the quiet and environmentally friendly way of traveling – by kayaks.

– What will be the 2 most important difficulties along your Arctic adventure?

There is no way to predict the ice condition before we actually leave for the expedition. We can certainly get a picture of the situation some time in beginning of July, but the wind can both break up established ice and quickly pack ice into areas which looks clear.

And to a hungry polar bear we are all food paddling into his / her backyard. The last people who tried paddling Nordaustlandet ended up to shoot a bear in self defence and one of them ended up in hospital severly injured. 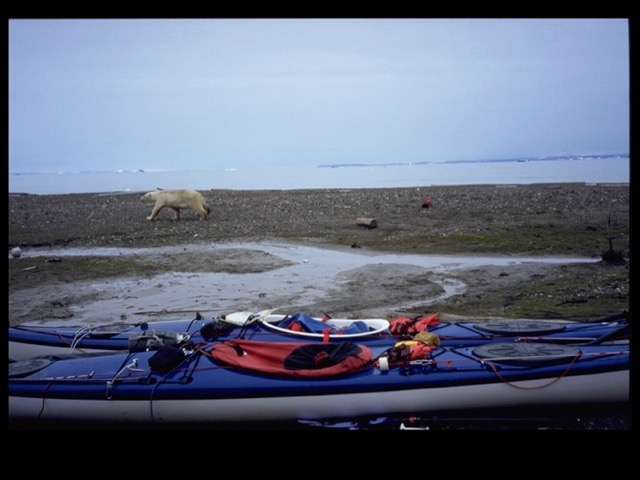 – But, you have already some great kayak expertize, for instance the circumnavigation of South Georgia Island achieved in 2010 with 3 of your norwegians friends…the sea conditions were quite hectic ?

Yes you are right, we successfully circumnavigated South Georgia Island in 2010. That was a fantastic trip. The weather conditions were relatively good, still encountering swell combined with waves up to seven meters high. Very exciting and intense. We were stopped by the weather four days on that expedition.

South Georgia also throws some fierce katabatic winds at you. South Georgia with its extreme landscapes and incredible wildlife is worth pushing limits and spending savings to experience. We also experienced a major kayak repair when a 2000 kg elephant seal passed on top of one of our kayaks and flattened it. 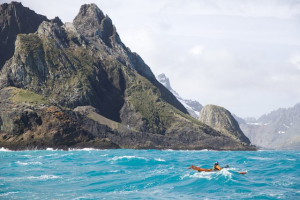 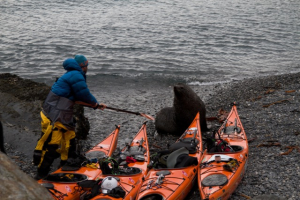 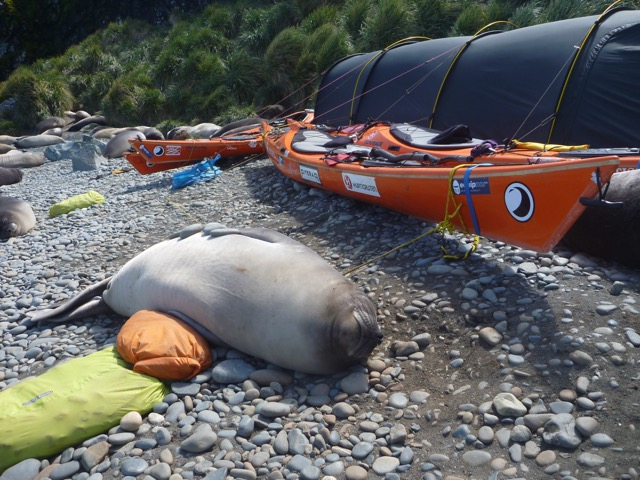 – Do you expect to encounter many marine widlife up there North, in particular walruses & the King of the Arctic, the polar bear?

Oh yes we expect to meet lots of polar bears. This is the main reason that we are five participants on the expedition, we intend to always have one person on polar bear watch and we will never leave the equipment all of us together.

We also expect to meet lots of walruses. These fascinating animals I have met before in kayak on the water. I have only seen the nice and polite walruses, but I have heard of kayakkers who have been attacked by them. That can be challenging. They are slow movers on land but in the water they are really fast.

– You were already confronted in 1999 to a hungry white bear destroying your kayak, robbing your food…which precipitated a helicopter rescue?

Yes you’re right, Jens Abild and I met 12 bears in 1999 when we tried to circumnavigate Spitsbergen. The last one we met completely destroyed our kayaks and ate quite a lot of food before we scared it off. It happened when we were a couple of hundred meters away in a cabin. The bear had gotten inside our bear fence and taken what it wanted, smashing through the fiberglass boats. When we went down to the kayaks later to gather more gear, that’s when we saw it and it saw us. Then it raced towards the sea, breaking the fence and triggering the small explosive set to warn us, it picked up speed when the blast went off and just swam as far as we could see away from shore. This was in Kvalvågen on the east coast.

– Walruses can be of a serious threat for kayakers…how will you handle such situation if they start being too curious?

Well we have been advised that their whiskers are the part of their body which are most sensitive, we’ll have to smack them over their whiskers with our paddles. Other than that we have to fire our signal guns at them. The situation have to evaluated fast, there and then. We carry rifles, shotgun and revolvers for self protection.

– So now, you are in the expedition preparation phase which is essential…how things are going on with the logistic, equipment needed, Sysselmannen authorization & sponsorships?

We have been very lucky this time being sponsored by the company LINDORFF. Logistics are always a challenge. However, we have a fantastic co-operation with Hurtigruten, they are sponsoring us by sailing us from Longyearbyen to Hinlopen. Through them we got in contact with Norlines who will carry our container with gear to Longyearbyen and back to Oslo after the expedition. The container was lent to us by Container Norway AS.

The formal documents for the expedition have been a handed to Sysselmannen (the Governor of Svalbard) and accepted without comments. We comply with all rules and regulations and will have our SAR insurance in place before departure. What we are doing now in between work and family business is training.

We all need to put some miles behind us in preparation for the long paddle ahead of us.

– When is the start date of the expedition, Simen?

– Where can Arctic05′ visitors follow you on the web?

We just decided that we will only use Facebook this time, we have made a FB site called Nordaustlandet 2015 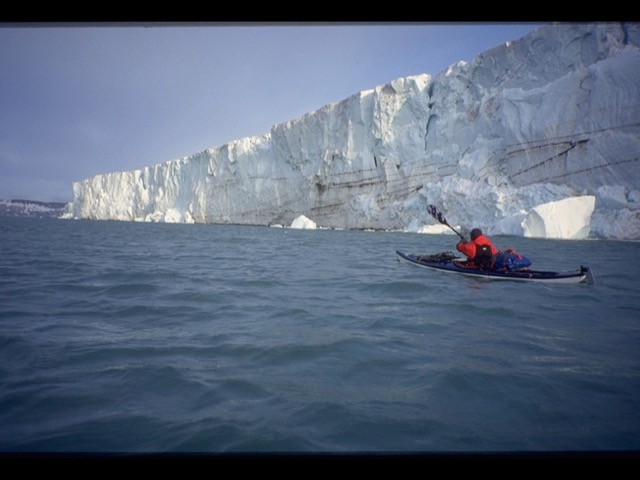 – Any special message you wish to share here with Arctic05′ fans before the achievement of your wonderful Arctic project?

I hope that lots of people will follow us on Facebook, if someone knows of people not in there, but still interested, please send them links they can follow. And I would like to encourage anyone who wants to go on expeditions or realize their dreams, to do so.

Sometimes your dream seem out of reach or far away, but if you start working everyday to get closer to the start of your adventure, eventually the day will be there, when you are ready to go. The most important is to set a date so you have something to work towards. 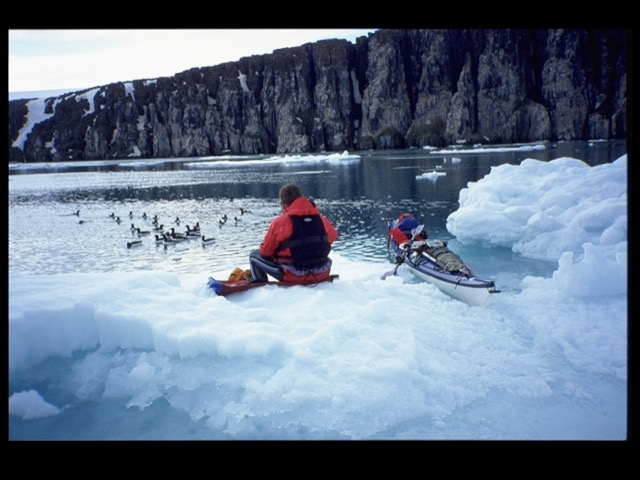 Let me please invite all Arctic05 fans to support them along what could be a “World Première”!

Enjoyyyyy well guys and please come back with lots of beautiful souvenirs & pictures to share with us!

Safe expedition to you 5, it’s gonna be breathtaking!