The Arctic Frontiers 2015  conference on climate and energy will be held in Tromso, Norway between the 18th till 23 January 2015! 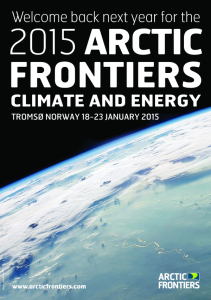 “… The 9th Arctic Frontiers conference will be held in Tromsø, Norway, with the title: Climate and Energy, from Sunday 18 January to Friday 23 January 2015.

The earth is in the midst of major climate changes. The Arctic is experiencing the impact of these changes more and faster than other parts of the globe. Processes starting in the Arctic may have deep and profound impacts on other parts of the globe. At the same time the Earth’s population is rising and with it the global energy demand. New and greener energy sources are gaining market shares, but still the energy mix of the foreseeable future will have a substantial fossil component. The Arctic is expected to hold major oil and gas resources, while the regions green energy potentials are less explored. How will the Arctic’s energy resources contribute to the global energy mix in the decades to come? How will the climate changes impact the Arctic environment and societies? And where will we find a balance between the planet’s energy demand and the necessity to reduce CO2 emissions? The Arctic Frontiers conference is a central arena for discussions of Arctic issues. The conference brings together representatives from science, politics, and civil society to share perspectives on how upcoming challenges in the Arctic may be addressed to ensure sustainable development. Arctic Frontiers is composed of a policy section and a scientific section… plus d’info sur le site officiel www.arcticfrontiers.com/ >>“.